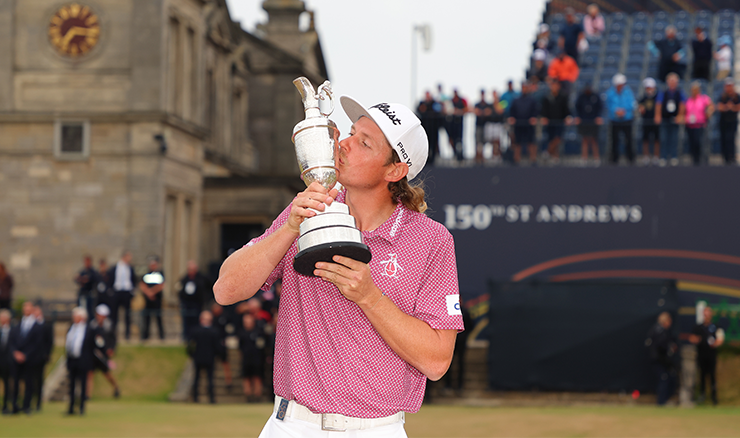 Starting his final round four shots back from leaders Rory McIlroy and Viktor Hovland, Smith shot a final-round 8-under 64 to surge to the top of the leaderboard and lift the Claret Jug.

“What a week. I’m going to fall apart here I know,” a tearful Smith said after lifting the trophy.

“All the hard work we’ve done over the last couple of years has really started to pay off, and this one definitely makes it worth it.

“I had a lot of support out there, especially the Aussie guys. You kept me going out there. This one’s for Oz.”

The win marks a significant career breakthrough for the humble and unassuming Queenslander, who appeared overcome by the weight of his accomplishment.

“To look at these names on this trophy, and then add mine is unreal. I’m lost for words,” he said.

“I’m definitely going to find out how many beers fit in this thing, that’s for sure.”

His final test came at the 17th, the famous Road Hole at the Old Course.

Having left his second shot on the par four in a precarious position short of the green with a treacherous bunker between him and the pin, Smith played an expertly weighted putt to the centre of the green before sinking the most important par putt of his career.

“I was just trying to get it on the green and give myself a look,” Smith said of his par at 17.

“The putter felt good all day so I knew if I could get it within 15-20 feet I was a chance, so I was lucky to get away with a four there.”

After soaking up the applause from the St Andrews crowd on the walk up the 18th, Smith closed with one final birdie to finish up at 20-under for the tournament, a shot clear of American Cameron Young in second and two of a disappointed McIlroy.

It is another near miss for McIlroy, who certainly did not throw this one away but was simply beaten by an historic round of golf.

“I felt like I didn’t do much wrong today, but I didn’t do much right either. I played a very controlled round, I did everything I needed to except for capitalising on the easier holes,” McIlroy said.

“I got beaten by the better player this week.”