Baumann, the current Swimming Australia Chief Strategist who leads the high performance arm of the organisation, is a Canadian native who won gold medals in the 200m and 400m individual medley at the 1984 Los Angeles Games.

With a wealth of knowledge in elite sporting organisations, he is the former Executive Director for the Queensland Academy of Sport and Chief Executive Officer of Queensland Swimming.

After returning to Canada to head up its high performance sport program (Own the Podium), Baumann was then appointed as Chief Executive of High Performance Sport New Zealand and is credited with helping New Zealand achieve its greatest ever Olympic team performance in Rio in 2016 with 18 medals.

Swimming Australia President Kieren Perkins congratulated Baumann on his appointment, noting he was a standout candidate from within the initial internal recruitment process. 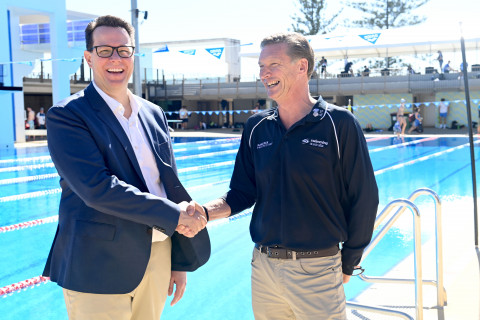 Kieren Perkins and Alex Baumann are looking forward to working together as President and CEO.

“In our recruitment process, we initially asked for expressions of interest from within our own Member Organisations and Executive team,” Perkins said.

“The Board felt we had strong talent from within our own swimming ranks and wanted to explore that further before casting the net wider if necessary.

“Alex has extensive experience both within leadership roles across other organisations and high performance sport, and I think his credentials speak for themselves.

“He is highly regarded, not just within Swimming Australia, but with all our Member Organisations and impressed us with his vision for our sport.

“His current role means he already has an important strategic influence on the organisation and we are very excited to see him transition into the CEO role.

“One of the first jobs Alex will undertake is a strategic review of the business with an eye on Paris and beyond.

“I would like to thank Tim Dempster for the exceptional work he has carried out in the role as interim CEO, Tim will now return to his role as Chief Operating Officer.”

Baumann said he was thrilled to be appointed as CEO.

“We are Australia’s most successful Olympic sport, but I want to see us become a leading sport within the fabric of the country,” Baumann said.

“Having led our high performance team for the past few years, of which I am extremely proud, it is great to be able to put my CEO hat on again and take on the role leading the organisation into the future.

“I am really looking forward to working with Kieren, our Board and our Member Organisations to reach our collective goals.”

Baumann will formally begin the role in May.

This media release is from Swimming Australia.

This site uses Akismet to reduce spam. Learn how your comment data is processed.